Arsenal boss Arsene Wenger believes that the away goals rule should count after extra time rather than full-time. 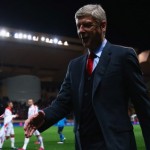 “The rule was created in the 1960s and the weight of the away goal is too great today,” said Wenger.

Away goals only count after extra time in the second leg of League Cup semi-finals, but are applied after 90 minutes in two-legged Champions League and Europa League ties.

Chelsea were also knocked out of the Champions League on away goals and Wenger said the rule was “outdated”.

“Two English teams have gone out on away goals and that should be questioned.

“The rule was created in the 1960s to favour attacking teams but football has changed.”