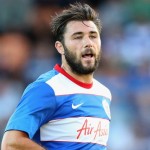 It has been revealed that QPR striker Charlie Austin won’t tout himself to Premier League clubs.

A number of Premier League clubs are understood to be keen on snapping up the former Bournemouth ace, including Newcastle United and Sunderland.

But Austin told talkSPORT: “I’ve said before, I’m loyal to QPR and I’m going to stay until the end of the season and aim to get to promoted, because that’s what I started out to do.

Despite seemingly pledging his short-term future to QPR, Austin has hinted that he will contemplate a move away from the Championship outfit if an interesting offer comes along.

“If something comes up in January that’s right for myself and my family then I’ll assess the situation with my agent then,” he added.

“However, if not, I will be happy to stay with QPR and play in any position they ask me to play.”