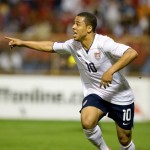 American forward Charlie Davies is back in France and says he’s a month from resuming training with Sochaux following a car accident.

The 23-year-old had been rehabilitating in Delaware following a one-vehicle accident Oct. 13 in Virginia that left him with two broken bones in his right leg, a broken and dislocated left elbow, a broken nose, forehead and eye socket, a fracture in his face, a ruptured bladder and bleeding on his brain.

Davies said he will undertake strength training and hopes to be playing for Sochaux before the Ligue 1 season ends in May. He will go to the Cap Sport Centre in Capbreton next week for rehabilitation.

“I need to get my body back into shape as far as being fit and being able to run again without being so tired,” he said.

He has two titanium rods inserted in his right leg and plates and screws in his left elbow as a result of his injuries.

Davies was a passenger in the car when the accident occurred on the George Washington Memorial Parkway. Ashley J. Roberta, 22, of Phoenix, Md. died in the accident.