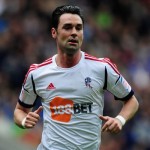 It has been reported that Charlton Athletic have snapped up former Manchester United midfielder Chris Eagles.

Charlton boss Guy Luzon is delighted to have signed the 29 year-old free agent.

Luzon said: “I’m sure he will help us. He is an attacking midfielder who can also play behind a striker. He is a player with quality and a good character.”

Eagles revealed he tried to join Charlton last season, but the move failed to materialise.

Eagles said: “We touched base [with Charlton] last season, but Bolton wouldn’t let me come.

“I came down Monday, trained, had a fitness test and everything was alright. Then on Wednesday night I agreed to it. I just wanted to get it done.

“I’ve had a great feeling about being here, it’s a massive club.

“I’m over the moon to be here and as soon as I knew they wanted to sign me it didn’t matter what they offered me I just wanted to be here.”