Reports are out claiming that clubs are queuing for Chelsea midfielder Charly Musonda. 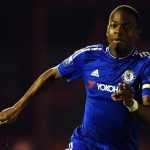 The London Evening Standard reported that Bayer Leverkusen, Lille and Rayo Vallecano have all made enquiries to Chelsea over loaning Musonda for the rest of the season.

The Belgium Under-21 international confirmed in December he was going to leave the club on loan this month.

Guus Hiddink’s arrival delayed things as the Dutchman wanted to have a look at Musonda train in view of possibly giving him an opportunity in the first team.

The highly-rated 19-year-old has yet to appear in the senior side, but is now set to move temporarily elsewhere in order to get some game-time.

Premier League giants Manchester United and Arsenal are also said to be interested in the talented youngster.