Reports are out claiming that West Ham United midfielder Cheikhou Kouyate is bursting with pride over his goal in their draw with Manchester United. 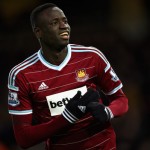 When a Mark Noble free-kick had ricocheted into his path, Kouyate, with his back to goal, showed off his fancy footwork in abundance, twice juggling the ball before volleying home on the swivel with a stunning third touch.

“It’s a beautiful goal because yesterday I spoke with Diafra and he told me, ‘tomorrow you’re going to score’ and I said, ‘yes, tomorrow I’m going to score’,” he told West Ham TV.

“I had a bit of luck and for me it’s magnificent, fantastic but a shame that we weren’t able to win, because had we won on Sunday, it would have been even better.”