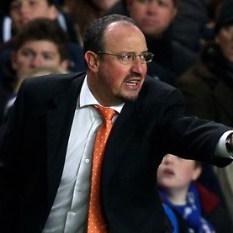 Rafael Benitez was booed off instead of on to the field on Wednesday after Chelsea produced a second straight bore draw in the west London derby against Fulham.

Three days after Benitez’s first game in charge of the Blues saw him endure a savage reception from his new club’s supporters, he was unable to turn the jeers into cheers as they slipped further off the pace in the Barclays Premier League.

And, as on Sunday against Manchester City, they could have easily lost against a Fulham side who had the better of the chances and a striker in Dimitar Berbatov who completely outshone opposite number Fernando Torres.

By the end of a frustrating evening for Chelsea fans, they were back to chanting, “You’re not welcome here”, at Benitez and even, “We want our Chelsea back”, in front of the watching owner Roman Abramovich, who looked as bored as anyone at Stamford Bridge.