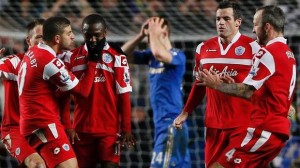 Chelsea’s recovery under Rafa Benitez was brought to a shuddering halt by Queens Park Rangers on Wednesday as the Premier League’s bottom team won 1-0 in the west London derby.

QPR’s first win in the topflight at Stamford Bridge since March 1979 was secured by Shaun Wright-Phillips scoring against his former club.

The end of Chelsea’s four-game winning run in one of the biggest shocks so far this season left Benitez’s side fourth in the standings, 14 points behind leader Manchester United.

“Maybe in odd areas we were tired,” Benitez said. “You could see we didn’t have the intensity and the pace on the pass and the movement that we were expecting.”