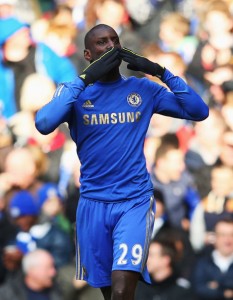 After Benitez’s outburst about certain Chelsea fans in midweek, a mutiny was anticipated from the home supporters.
But after a series of banners had been unfurled asking for Benitez’ s exit in the build-up, the game settled down and Chelsea dominated proceedings for 75 minutes of the match.

Ba put them ahead, although Oscar spurned a series of chances to add to the tally and kill the game off.
It meant that the all-too-familiar Chelsea jitters returned in the final quarter of an hour as West Brom finally went in search of an equaliser.