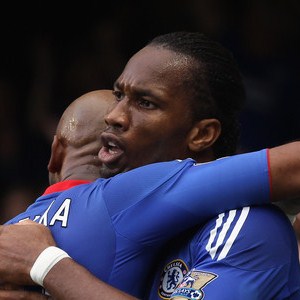 Chelsea moved four points clear at the top of the Premier League after a goal in each half from Didier Drogba and Alex earned them a vital 2-0 victory over London rivals Arsenal at Stamford Bridge.

Drogba backheeled Ashley Cole’s low cross into the net at the near post five minutes before the break for his 13th goal against Arsene Wenger’s side in 11 starts.

Defender Alex settled the contest with a powerful 30-yard free-kick in the 85th minute to hand the Gunners their second successive league defeat.