Oscar and Eden Hazard scored first-half goals, leading Chelsea to a 2-0 victory over Inter Milan on Thursday night in a quarterfinal match at the Guinness International Champions Cup.

Despite not starting four of its stars that played in the Confederation Cup, including Brazil’s David Luiz and Spain’s Juan Mata, Chelsea nonetheless at times looked to be in midseason form in the exhibition match before a crowd of 41,983 at Lucas Oil Stadium.

Hazard’s came on a penalty kick in the 29th minute. 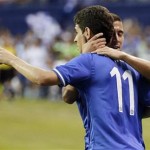 Southampton Confirm The Permanent Signing Of Ryan Bertrand From Chelsea