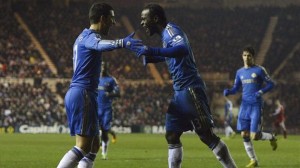 Rafa Benitez watched his Chelsea side beat Middlesbrough 2-0 in the FA Cup fifth round on Wednesday and then announced he would leave at the end of the season, delivering an emotional outburst that included a swipe at the club’s fans and hierarchy.

As with most games in his turbulent reign that began in November, Benitez was barracked by a section of supporters at Riverside Stadium in London.

An unconvincing win was sealed by goals from Ramires and Victor Moses in the second half, setting up an eye-catching quarterfinal against Manchester United at Old Trafford on March 10.