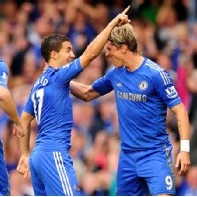 Chelsea playmaker Eden Hazard was again the standout player as he orchestrated a comfortable 2-0 victory over Newcastle in their Premier League clash at Stamford Bridge.

The Belgium international opened the scoring from the penalty spot in the 22nd minute before brilliantly laying on the second goal for Fernando Torres in first-half stoppage time.

Chelsea were without injured skipper John Terry and left vice-captain Frank Lampard on the bench, but still had enough quality and experience to dominate against a good Magpies side.

The victory saw the Blues maintain their perfect start to the new season and return to the top of the fledgling league table.