Chelsea continued their seemingly inexorable march to the title with Diego Costa scoring his 11th league goal of the season in a 2-0 win over 10-man West Bromwich Albion at Stamford Bridge. 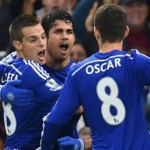 Jose Mourinho’s side moved ahead on 11 minutes when Costa controlled an Oscar cross before planting a volley into the net before Eden Hazard added the second goal 14 minutes later after slipping the ball beyond Ben Foster from Cesc Fabregas’s passed corner.

West Brom’s defence was in a dreadful state, and their day continued to go from bad to worse when Claudio Jacob was sent off for a two-footed tackle on Costa just before the half-hour mark.

It was a harsh decision having won the ball, but was a technically correct call by referee Lee Mason in the modern game such was the dangerous element of the challenge.

The second period was a non-event with Chelsea content to declare on two, but West Brom can thank goalkeeper Ben Foster from preventing a heavier defeat.

Chelsea are seven points clear of second-placed Southampton after 12 games of the season. They have only spilled points in draws at Manchester City and Manchester United.