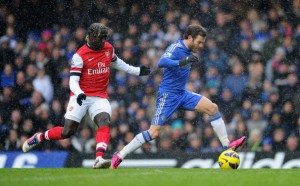 Chelsea held off London rivals Arsenal to claim their first home win of 2013 at the fourth attempt.
Juan Mata drove in a shot to put the Blues in front, although the visitors had justifiable claims of a foul against them in the build up.

Keeper Wojciech Szczesny brought down Ramires and Frank Lampard scored from the spot for a Chelsea second.
Arsenal forward Theo Walcott’s clinical sidefoot finish gave the visitors hope but Chelsea held on for the win.