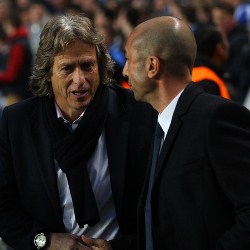 Chelsea will once again meet Barcelona in a Champions League semi-final after being made to sweat late on by 10-man Benfica in a 2-1 victory on the night which completed a 3-1 aggregate quarter-final win.

Frank Lampard’s 21st-minute penalty appeared to calm the home side’s nerves after weathering an early storm, as did the dismissal of the visitors’ stand-in captain Maxi Pereira just before the break.

But a powerful header from a corner by Javi Garcia with five minutes remaining saw a touch of anxiety creep back into the game, until substitute Raul Meireles lashed home the winner on the night in stoppage time to make sure there would be no dramatic turn-around.

Roberto Di Matteo’s side will now meet Barcelona for the right to take on either Real Madrid or Bayern Munich in the final at the latter’s own Allianz Arena in May, a semi-final fixture which comes three seasons after the Blues’ controversial exit to the Catalan outfit in this competition.