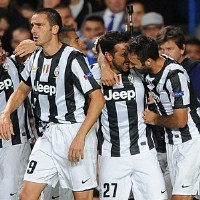 Chelsea blew a two-goal lead as their defence of the Champions League got off to a breathless start against Juventus in a match that ended 2-2.

Oscar looked set to enjoy a dream European debut with a stunning first-half double but the Italian champions ruthlessly exposed the holders’ defensive deficiencies to snatch a draw at Stamford Bridge.

Arturo Vidal pulled a goal back before the break and, after Eden Hazard was denied what appeared a penalty, Fabio Quagliarella came off the bench to equalise and was a lick of paint from completing a sensational turnaround.

That would have been cruel on Chelsea but – as in their UEFA Super Cup thrashing by Atletico Madrid – they left themselves exposed enough to make such an outcome possible. Didier Drogba : Arsenal, Spurs Deserve To Be Above Chelsea!