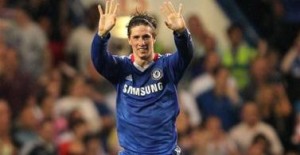 Fernando Torres broke his goal drought for Chelsea to push West Ham one step closer to relegation with a 3-0 defeat at Stamford Bridge.

The Spanish striker had spent an unsatisfying 732 goalless minutes in the blue of Chelsea since a British record £50m move in January.

But he finally ended his goalless run to fire Carlo Ancelotti’s side six points behind leader Manchester United ahead of a showdown between the pair on Sunday, May 8.
Chelsea took the lead just before half-time as Frank Lampard timed his run to perfection to dispatch an Ashley Cole cross past his old side.

And as the Blues continued to toil in the rain the visitors tried their hardest to find a way back into the game, with Carlton Cole and Demba Ba both missing decent chances for the Hammers.

But Torres, on as a substitute in his 14th appearance for Chelsea, fired home in the 84th minute to secure victory.
Running onto Nicolas Anelka’s through ball he spins and fires beyond the Robert Green into the corner.
Soon after Florent Malouda added a third in added time with a powerful effort.

That result leaves West Ham rock bottom of the table with just four games to play.