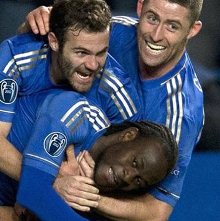 Victor Moses came off the bench to score an incredible last-gasp winner as Chelsea survived a Shakhtar Donetsk onslaught to keep their Champions League fate in their own hands.

The Blues were in danger of being the first holders to crash out of the competition before Christmas as former target Willian twice cancelled out almighty howlers from goalkeeper Andriy Pyatov which gifted goals to Fernando Torres and Oscar, the latter’s fourth in as many Champions League games.

But late substitute Moses nodded home Mata’s 94th minute corner to steal a barely-believable victory that put Chelsea level on points with their opponents at the top of Group E with two games remaining.

Blues boss Roberto Di Matteo refused to shy away from the importance of the game from the moment the final whistle went in the reverse fixture – which Chelsea lost two weeks ago – branding it must-win.