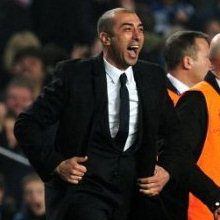 Chelsea overcame a 3-1 first-leg deficit by beating Napoli 4-1 after extra-time to qualify for the quarter-finals of the Champions League 5-4 on aggregate after a Stamford Bridge classic.

In a thrilling encounter in London, goals from Didier Drogba and John Terry put Roberto Di Matteo’s Blues 2-0 up.

Gokhan Inler’s spectacular effort made it 2-1, putting Napoli ahead after their 3-1 win in Italy, but Frank Lampard converted a penalty after Ezequiel Lavezzi handled in the box.

Extra-time followed, during which Branislav Ivanovic fired a rasping finish into the roof of the net after Drogba picked him out.

Leading 5-4 on aggregate, the hosts defended stoutly and could have added more as Napoli crashed out.

Chelsea, fifth in the Premier League, enter the quarter-final draw as the only remaining English side.