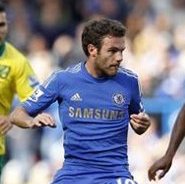 Chelsea cemented top spot in the Premier League with an attacking masterclass, romping to a 4-1 win over Norwich at Stamford Bridge.

Grant Holt gave struggling Norwich an early lead against the run of play after 11 minutes, but Fernando Torres levelled three minutes later, before Frank Lampard and Eden Hazard scored delightful goals to put the Blues comfortably ahead after half an hour.

In the second half it might easily have been a rout as Oscar, Juan Mata and Hazard took centre-stage, but in the end Chelsea managed only one more, a sumptuous volley from Branislav Ivanovic 76 minutes in.

The Blues will finish the weekend four points clear at the top of the table, while Norwich remain stranded near the foot of the league.