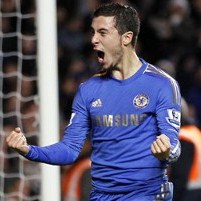 Chelsea sensationally avenged their bitter Premier League defeat to Manchester United as they won an nine-goal Capital One Cup thriller 5-4 after extra-time at Stamford Bridge.

United looked set to pile on the misery for the European champions with a 3-2 fourth-round victory three days after ending their 10-year wait for a league win in west London, in the most controversial manner imaginable.

But Eden Hazard scored a penalty with the last kick of normal time before Daniel Sturridge and Ramires completed an amazing comeback just 24 hours after Arsenal’s astonishing 7-5 win at Reading.

Just as in that game, defending was nowhere to be seen as United led three times through Ryan Giggs, Javier Hernandez and Nani and Chelsea hit back with a David Luiz penalty and Gary Cahill header.

Giggs also scored an extra-time consolation from the spot for United as the Mark Clattenburg saga was briefly forgotten.