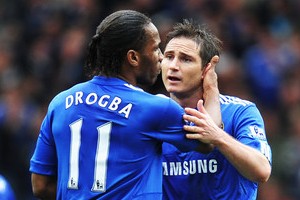 Chelsea clinched the Premier League title and set a new goalscoring record with a sensational destruction of ten-man Wigan at Stamford Bridge.

Coach Carlo Ancelotti guided the Blues to their first Championship success since 2006 in his debut season in England as Chelsea took their tally to 103 goals – the highest in the Premier League since Manchester United in 2000 and the first to achieve the century since Tottenham in 1962-63.

United’s victory over Stoke at Old Trafford was irrelevant as the Blues finished the season one point clear of their rivals.

Ancelotti’s side smashed home seven or more goals for the fourth time this season as Wigan, who had defender Gary Caldwell sent-off on the half-hour, simply capitulated.