It has been reported that Chelsea boss Jose Mourinho has again declared Eden Hazard is not for sale. 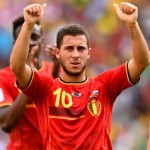 The Belgium international star will remain a key figure despite reports linking the Belgium playmaker with a summer switch to Paris St-Germain.

“People like Eden bring the magic and win matches in one action,” said Mourinho.

“They have the flair and the artist’s touch of the football.

“At the same time, he was not just that. He had a big evolution and he scored more goals than before.

“His work-rate for the team improved a lot too, so for a player like him he deserved it and the fact he was recognised by the fans gives him for sure more appetite for the next season to be even better.” Radamel Falcao To Turn Down Chelsea For Monaco Stay