It has been reported that Radamel Falcao is set to join Chelsea on a season-long loan. 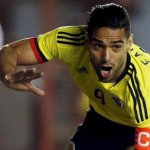 Sky Sports is of the belief that the Blues and French club Monaco have come to an agreement over a 12-month contract for the 29-year old Colombian striker.

The Colombian international spent last season on loan at Manchester United but performed below par by scoring just four goals in 29 appearances in all competitions, however, Jose Mourinho feels he can get the best out of the former FC Porto and Atletico Madrid star.

Some reports suggest that Chelsea may send Croatian midfielder Mario Pasalic and young Belgian ace Charly Musonda Jr to the Stade Louis II as part of the deal but that is yet to be confirmed.

It has also been suggested that the Falcao deal will be finalised once he completes his duties with Colombia at the Copa America in Chile.

Eden Hazard Insists Chelsea Must “Go For The Throats” Of PSG