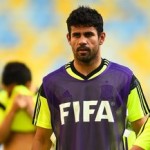 The Brazilian born Spanish international had long been linked with a move to Stamford Bridge and now the Blues have confirmed they have met the buy-out clause for the 25-year-old.

“Chelsea Football Club can confirm an agreement has been reached with Atletico Madrid for the transfer of Diego Costa, with Chelsea meeting the buy-out clause for the Spanish international,” read a statement on the club’s official website.

Brazil-born Costa netted some 35 goals for Atletico last season as they won the Spanish title and reached the Champions League final, where they lost in extra-time to Real Madrid.