It has been reported that Premier League clubs are circling Santos for Gabriel Barbosa. 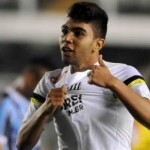 The Daily Express claims that Chelsea, Manchester United and Arsenal are all keen on signing Santos star Barbosa, who has been dubbed the ‘new Neymar’.

The striker’s contract is set to expire in 18 months, and reports claim that the Premier League trio are lining up summer moves to bring Gabriel to England.

The Brazil U20 international, who has nine goals in 37 senior appearances for Santos, has a release clause of £40million, but it is understood that a bid of around £24m would be enough to secure his signature.

Bundesliga outfit Wolfsburg have also been credited with showing interest in Gabriel, but it is Barcelona who are leading the hunt for the 18-year-old.