Reports are out claiming that Chelsea star Eden Hazard admits he came close to joining Ajax as a junior player. 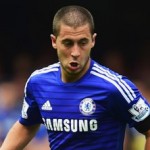 The Belgium international was followed by Ajax as a 12 year-old.

“I was 12 years old and went with my then amateur (Royal Stade Brainois) team to a tournament at Standard Liege. I think I played quite well, because Ajax, one of the other participants, did some checking on me.

“Anyway, it ultimately did not happen. Two years later I went to the youth team of Lille.”