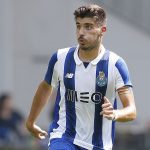 Reports have emerged claiming that Chelsea are moving ahead of Liverpool in the race for Porto midfielder Ruben Neves.

The Sunday Mirror says he 19-year-old has made a flying start to the season in Portugal and that has convinced the Blues to make their move.

They are willing to offer around £24million plus a player with add-ons to follow for the £35m-rated player.

But they want an answer from him one way or the other by the first week of November over whether he will join them in January.

Liverpool and Valencia are all keen and have had Neves watched, but Chelsea lead the chase.