Reports have emerged claiming that Chelsea manager Jose Mourinho believes Arsenal did not come to play in the Community Shield on Sunday. 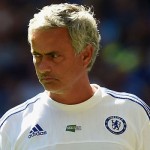 The Gunners defeated the Blues 1-0 at Wembley to kick off the 2015/16 season with the first piece of silverware but the performance of Arsene Wenger’s men did not really impress Mourinho.

Alex Oxlade-Chamberlain’s 24th-minute effort proved the difference in the end in a match where Mourinho’s side made most of the running but were unable to breach a resilient Gunners defence.

“One team played with initiative well but without the sharpness you need to be more aggressive with the ball. The team tactically tried everything.

“My opinion is the team that defends very well, that leaves their philosophy in the dressing room, changes their attitude, plays all the second half with nine players in front of the box, doesn’t concede and scores one goal, from that perspective they deserve to win.

“This is football. This is very good tactical organisation. Congratulations to them.”

The defeat was the first one Mourinho had tasted in 14 matches against Arsenal boss Wenger. Arsenal Locked In Talks With Napoli For Faouzi Ghoulam