According to manager Jose Mourinho, Loic Remy is the perfect player to have been signed by Chelsea. 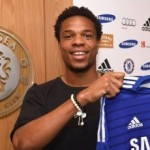 The French international striker joined the Blues from QPR for £10.5million on deadline day of the summer transfer window following the departure of Fernando Torres to AC Milan.

Remy arrives at Stamford Bridge having scored 20 goals in 41 appearances in England for both the R’s and Newcastle United and Mourinho feels his capture was a great piece of business by the west London club.

“Remy was almost in the last day, but that was just a consequence of Fernando leaving, a reaction to an unexpected situation,” said Mourinho.

“But, even so, the club was ready to give us a striker that we like and that we believe is perfect to be one of our three. So we did our job in a good way, I believe, with something that is fundamental for us.

“It’s not just a legal question for Chelsea, but a pride question. And my club did it in a magnificent way with the income and the players that we bought.”

Remy could make his Chelsea debut this weekend when the league leaders take on second-placed Swansea City at home on Saturday.