It has been reported that Chelsea boss Jose Mourinho hailed two goal Diego Costa after their 6-3 win at Everton. 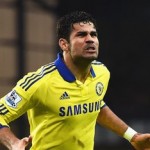 Costa, an injury doubt before the match, opened the scoring for Chelsea in a match that would become a nine-goal thriller.

Mourinho’s side eventually edged out the Toffees, but not before former Chelsea striker Samuel Eto’o found the net, and the Portuguese coach was full of praise for his forward.

“He’s a good finisher, he gives us not just that final touch but he also operates defensively and I can remember him making some tackles on the edge of the box so he is giving us what we expected,” Mourinho said.

Mourinho enjoyed the feast of football but could not hide his eagerness to cut out the sloppy mistakes that saw Thibaut Courtois pick the ball out of his net three times.

“I think if the salt and pepper of football is goals then to have nine goals in a Premier League match is fantastic ingredients so I think (we saw) two teams that played the offensive way fantastically well,” he said.

Salomon Kalou Linked With A Move To Lille