It has been reported that Chelsea boss Jose Mourinho is happy to be top of the table at the halfway mark of the season. 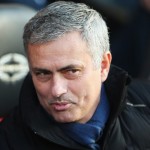 The Blues are three points ahead of Manchester City in the standings.

“We’ve had very difficult fixtures away from home and we lost one game we didn’t deserve to lose at Newcastle. We are doing well,” said Mourinho on recent away form.

“Tomorrow is a day off because my players deserve it and against Tottenham we will be there again trying to play a good game and a get a good result.”