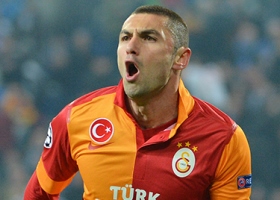 It is said that Mourinho is a big fan of the Turkey international and Istanbul media sources suggest a swap deal could be on with Demba Ba going in the opposite direction.

Gala would be open to the proposal, seeing Ba as a replacement for Didier Drogba, who has turned down the chance to open talks about a new deal.

While with Real Madrid, Mourinho said of Yilmaz: “Drogba, Sneijder and Burak can play for any team in the world.”