Chelsea boss Jose Mourinho has admitted that Oscar is a doubt for their clash with Manchester City. 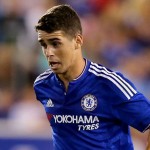 The Brazilian international midfielder, who scored in his side’s controversial 2-2 draw with Swansea City in their first game of the season, is reported to have picked up a knock during a training session earlier this week.

Mourinho confirmed he has no other injury concerns in his squad.

Mourinho confirmed: “Oscar is a doubt, he had a little injury in training. Courtois is suspended, apart from that it’s all good.”