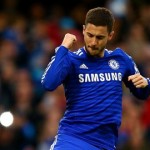 The Blues boss is a big admirer of the 24-year old Belgian winger who scored the only goal in the 1-0 win over Manchester United on Saturday.

The Portuguese taactician has revealed that he spoke to Hazard in the lead-up to the game and told him the side could not lose to United at Stamford Bridge.

The Belgium international was the difference as Chelsea moved 10 points clear on top of the Premier League table and his performance clearly impressed Mourinho who rates the former Lille star alongside Lionel Messi and Cristiano Ronaldo.

“Eden is getting physically, mentally, very strong. He understands his role,” said the Portuguese.

“I told him: ‘This game we will never lose. Never.’ But we needed to win. He understands clearly that especially now, where the team doesn’t have all its power, his talent is fundamental. He was there for us.

“I have had lots of stars wherever I have worked. But he is the humble star. He has not changed. The kid is a great kid and he knows that he is one of the three best players in the world.

“Yes, I want Eden to win the award. But the award I want him to win is the Premier League.”