It has been reported that Chelsea boss Jose Mourinho is happy with Kurt Zouma’s form at centre-half. 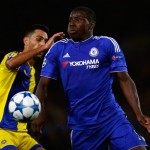 Zouma and Gary Cahill could face Tottenham on Sunday with John Terry struggling with injury.

“I have complete trust in Gary Cahill and Kurt Zouma,” insisted Mourinho, “which is why in an important match for us on Tuesday I left Kurt out after good performances he is having to show Gary that confidence.

“They are ready. I am not saying Papy Djilobodji is ready because he did not have chances to play and his is a different situation, but Zouma and Cahill are both ready and if John doesn’t play, I go with them.”