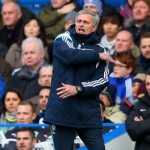 Reports have emerged claiming that Chelsea boss Jose Mourinho has questioned the ambition of Arsenal.

The Portuguese tactician praised the players in the Arsene Wenger’s side, who have struggled to maintain consistency despite spending over £80 million this season.

Speaking on Goals on Sunday on Sky Sports Mourinho said: “Arsenal? I don’t understand why they are not where we are, with Manchester City, because I like their team.”

“I think they have very good players. Alexis [Sanchez], [Danny] Welbeck… important players added to an already very good squad. I think they are a team for more.”

He continued: “At this moment [Wenger] has a dream job that we would all love to have. He has the stability and has the time to buy and sell and wait for success… and wait, and wait… I think he has the dream job.”