It has been reported that Chelsea captain John Terry was left frustrated with their Champions League draw to Schalke. 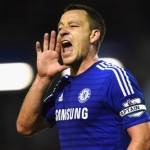 Speaking after the match Terry, who had another solid game at the heart of the Chelsea defence, claimed that the Blues were the architects of their own downfall – and that they should have killed off the game when they had the chance.

He said: “We were pretty comfortable in the first-half.

“The manager kind of stressed that in the second-half we looked a-bit sloppy late on and not to throw it away, and we did exactly what he predicted.

“It’s disappointing to drop points in our first game at home.

“The first four league games we’ve been killing teams off, tonight we do it but it disappointed to concede the way we did from a counter-attack, from our own corner as-well.” Roma Not Interested In Selling Mattia Destro To Arsenal, Chelsea Romelu Lukaku Admits Chelsea Not The Right Team For Him