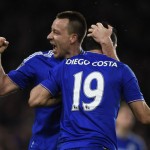 It has been revealed that Chelsea captain John Terry is a target for three Chinese Super League clubs.

And ex-Chelsea chief Phil Scolari has also made enquiries from champions Guangzhou Evergrande.

Another Stamford Bridge old-boy Dan Petrescu is boss at Jiangsu Suning — and would not mind having Terry to bolster his squad, either.

Marcel Desailly : David Luiz Is Better Than Me!