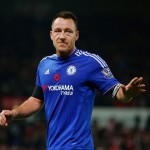 Reports are out claiming that Chelsea captain John Terry is being tipped for a sensational move to Manchester United.

The Mirror says United are among the favourites to sign Terry should he leave Chelsea at the end of the season.

Blues skipper Terry is out of contract at the end of June and doesn’t expect to be offered a new deal.

While New York Red Bulls have been made 4-1 favourites for his signature, Manchester Untied are second favourites at 5-1.

While it seems unlikely Terry would join one of Chelsea’s rivals, the possibility of Jose Mourinho moving to Old Trafford this summer could change things.