It has been reported that Chelsea skipper John Terry has welcomed new signing Cesc Fabregas. 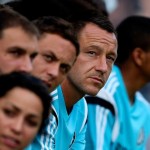 The former Arsenal captain arrived before the World Cup from Barcelona.

“He is great on the ball, a great box-to-box player, he scores an awful lot of goals as well and he has got an aggressive streak in him too – I certainly remember that from his Arsenal days.

“I’m sure he is going to fit in really well at Chelsea and do well in the years to come.”