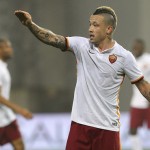 Reports are out claiming that Chelsea are closing on a deal for Roma midfielder Radja Nainggolan.

The Sun reported that the Blues have met with the player’s agent Remy Abbas and the Roman outfit’s sporting director Walter Sabatini.

A picture in Corriere Dello Sport appeared to capture the aftermath of a meeting between Chelsea officials and Abbas.

Having managed Roma title-rivals Juventus, Conte – who was appointed on Monday – is well aware of the dangers Nainggolan poses to his opposition. Jose Mourinho Has No Regret Over Arsene Wenger “Voyeur” Taunts