It has been reported that Filipe Luis has completed his move from Atletico Madrid to Chelsea. 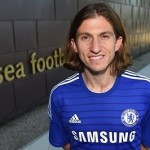 The 28 year old Brazilian left-back has signed a three-year contract.

A fee understood to be in the region of £15m was agreed between the two clubs earlier this week and the deal has now been rubber-stamped after all the formalities were completed.

Luis told the club’s official website: “This move is a dream come true for me. I now have the opportunity to play for Chelsea and also in the Premier League.

“I am looking forward to getting started and giving my best for the team during the coming season.”