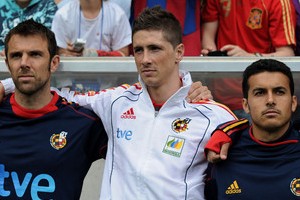 Chelsea are preparing a bid for Fernando Torres as they seek to take advantage of the chaos at Liverpool.

It has been reported that Roman Abramovich is ready to lock horns with Manchester City owner Sheik Mansour in a deal that could reach £70million.

And Abramovich believes the sense of uncertainty at Anfield created by the departure of manager Rafael Benitez has presented him with the ideal opportunity to tempt the Spain striker to Stamford Bridge.

Chelsea are prepared for a protracted battle and are confident Liverpool’s owners will not be able to resist a bid that would more than treble the £21m it cost them to sign Torres from Atletico Madrid in 2007.

Although Torres only signed a new four-year deal worth £110,000 a week 12 months ago, he has grown increasingly disillusioned with the deteriorating situation at Anfield that cost Benitez his job earlier this week.

Liverpool are desperate to keep him but the 26-year-old has indicated he will make a decision on his future after the World Cup.