It has been reported that Chelsea are confident trumping Manchester United for Inter Milan midfielder Fredy Guarin. 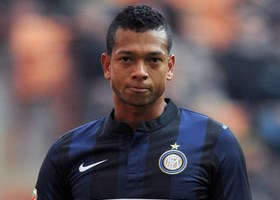 The People revealed that officials of the Italian club were at Stamford Bridge last week – and the subject was the 27-year-old Colombian.

It is more bad news for the Red Devils, who thought they were in the box seat for Guarin, especially with Inter interested in Javier Hernandez.

Guarin is rated at £15million, which should not be a problem for Chelsea or United.