It has been reported that Chelsea boss Jose Mourinho is considering a move for Barcelona veteran Dani Alves. 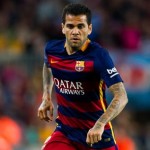 Mourinho is in the market for a new right-back as cover – and a potential successor – for Branislav Ivanovic.

Alves, who penned a new deal with Barca last month, is on Mourinho’s shortlist, says AS.

The Brazilian could find himself under pressure at Barca from Aleix Vidal following his arrival from Sevilla.