It has been reported that Chelsea defender David Luiz has passed his PSG medical. 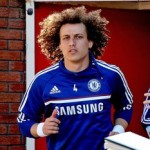 The Daily Mail revealed that the Brazilian international has passed a medical and agreed terms with Paris Saint-Germain ahead of his £50million switch from Chelsea.

It is said that PSG representatives flew out to Brazil to complete the medical at the World Cup hosts’ training base on Friday.

PSG believe they are capturing one of the most stylish defensive players in the world and they are flexing their financial muscle again in what will be the first major transfer of a busy World Cup summer.