Reports are out claiming that Chelsea defender Gary Cahill has welcomed the return of Blues legend Didier Drogba. 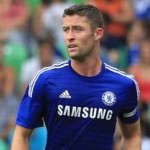 The England international defender believes the return of veteran striker Drogba will provide a much-needed lift to the squad on and off the pitch.

The 28 year old said: “I was excited by the rumour [of Drogba’s signing] even before it was announced. To have it confirmed was fantastic. He will give the club and certainly the squad a huge boost. Didier is both a goalscorer and a huge personality and brings both to the club.

“It’s a great combination to have a scorer and a big character in the dressing room, someone who has been around and done a lot of things in the game. He is a role model at the club and a great figure to have in what we are trying to achieve this season.

“Of course the youngsters can benefit from him being around. When you have someone like him, who is still a top-class player and has all the experience and won many things, it’s great. You can learn off the best and he certainly is one of the best.”