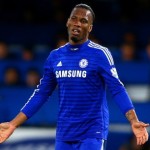 Reports are out claiming that Chelsea defender Branislav Ivanovic is backing Didier Drogba to rattle Arsenal’s defence this season.

Drogba has scored a remarkable 13 goals in 14 matches against the Gunners for Chelsea.

Asked by the London Evening Standard if he thinks Arsenal will not want to play against Drogba again, Ivanovic said: “Of course not.

“When you are a striker and have this feeling (of scoring every time you face a team) goals come naturally.

“He will play with a different feeling against Arsenal. I hope he scores for us again and makes it 16 goals against them. Even if he doesn’t, to score 15 goals against a team is not normal. It is an amazing number.”